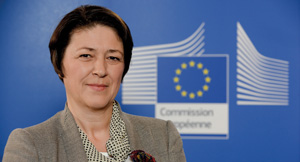 “The ILU-Code, a standardized identifier for intermodal loading units in Europe, is an important voluntary initiative supporting the competitiveness of Combined Transport. It is a very good example of paperless solution for stakeholders of these transport-chains.”

The introduction of containers and their worldwide standardisation using ISO¹ standards has resulted in streamlining of sea shipping which in turn brought about a significant expansion of world trade and created the basis for globalization.

In continental transport, intermodality enables to effectively combine the advantages of two or more transport modes, for instance the high transport capacity, safety and environmental performance of rail, or of inland navigation with the flexibility of road over short distances and in crowded urban settings.

ISO containers are shipped via road, inland waterway or on rail mainly in sea port hinterland traffic whereas in continental transport standardised CEN² swap-bodies and semi-trailers are used as easy to tranship loading units. They are better adapted to the authorized dimensions for road vehicles and europallets, while are also lighter and more flexible to tranship. Due to the common technical characteristics many road vehicles, wagons and transhipment devices may be suitable for transporting loading units.

This flyer is available in English, French and German.

ILU-Code stickers: Special offer
Need to order stickers? Get a 15% discount on your online sticker order